I translated this brief history of gardens in China from the reference book: 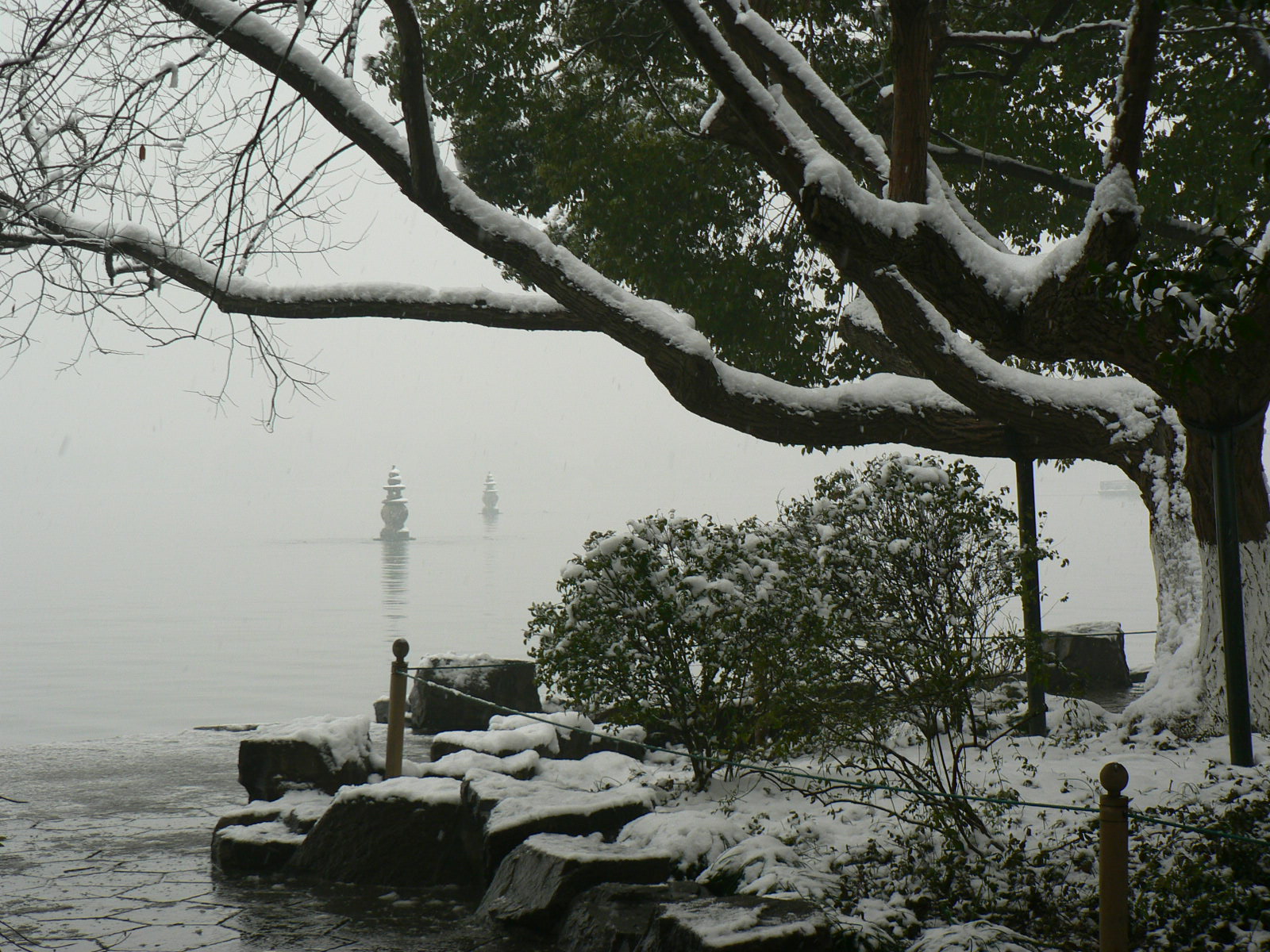 Hangzhou West Lake. Copyright ©2013 J.Richard. All rights reserved.
After three hundred years of chaos, the Sui1 and Tang2 dynasties marked the return to a peaceful and united Chinese territory. The economy was improving, allowing a resurgence of palatial garden building. The emperor Sui Wendi3 built in Daxing a garden called Daxingyuan4, then the emperor Sui Yangdi5 in turn built a garden called Xiyuan6 in the eastern part of Luoyang. The latter was an artificial, wide scaled man-made imperial park. The land surface was undulated, and the northern part included a group of sixteen buildings. Furthermore the water of the Luo river was diverted so as to flow the garden's main pond, which featured the three fabled islands following the model of Han Wudi's garden. Besides there were five smaller ponds, and the whole hydraulic system was linked. The Xiyuan was not only of wide scale, but its composition had also reached a new complexity: even if it imitate the Han dynasty gardens, it also had originality, which was best illustrated in the unprecedented concept of '' garden inside a garden''.


The end of the Sui dynasty was marked by four peasant insurrections, Li Yuan7 raised troops and [overthrown the Sui and established a new dynasty], the Tang8. Not only did he quickly restored the feudal order, but he also managed to increase Chinese productivity, announcing an unprecedented period of prosperity in China. Parallel to the economic development, the literature and art also reached a new peak. By this time landscape painting already obtained a unique status inside the general painting art. Landscape painting separated into two schools: the first was led by the painter Li Sixun9, characterised by the Gongbi10 brush style; the second was led by Wang Wei11, and characterised by the Xieyi12 brush style. Besides, the natural landscape acquired a great importance in the poetry and travel writing. This explains why the theme of natural beauty received an even greater popularity than before.


Under the Tang dynasty, the capital Chang'An was the world's biggest city. At the north of the city was located the palace named Taijigong (太极宫), or Xinei (西内). Behind its main building named Taiji dian (太极殿) lived the imperial wives and concubines. In the northern part, near the wall was situated the imperial garden, inside which were hills, ponds, platforms and halls, etc. Because of the relatively small scale of the Taijigong, at the beginning of the Tang dynasty, another palace named Daminggong (大明宫), or Dongnei (东内) was built in the northern part of the city, near the previous one. In the northern corner of the Daminggong was built a garden, featuring a wide pond named Taiyechi (太液池). This pond was occupied by a single small mountain called Penglai. To the south of the pond laid the following buildings: the Zhujing dian (珠镜殿), the Yuyi dian (郁仪殿), and the Shicui dian (拾翠殿), etc.


Moreover, a palace named Xingqinggong (兴庆宫) was built in the eastern part of the capital. Beside the administrative buildings, another part was intended for the entertaining of the emperor: the main feature was a big oval pond called Longchi (龙池) surrounded by pavilions, vegetation and flowers.


In addition to the previously named palaces, in the south-east corner of the city was built the Furongyuan (芙蓉园). On the west the garden overlooked the river, and featured wide areas of water circled by pavilions, platforms and all sorts of buildings, creating a beautiful landscape. To allow the emperor go sight-seeing, a connexion was built so that it communicated with the two palaces Dongnei and Xinei.


Furthermore, a hunting park was built outside the walls, at the north-west of the city and the south of the river. The enclosure had a scope of 120 li and it featured kiosks, platforms, pavilions and ponds.


Outside Chang'An or Luoyang, many scholars chose to built gardens on the mount Lushan ( 庐山), following the example of Bai Juyi who built there his famous Caotang (草堂). As for the poet Wang Wei, he chose to create the Wangchuan garden (辋川别业) on his Lantian (兰田) estate. These gardens did not contain much man-made parts, as the mountain's natural beauty provided the scenery. As a result they gave a much natural feeling than those other gardens built in and around the cities.

About Chinese Gardens and Art